What is SOTEU? SOTEU from the State of the European Union is the annual speech (since 2007) where the President of the EU Commission, this time Jean Claude Juncker, analysis the past year and marks the political priorities for the following. After his speech, he debates it with the MEPs.

Why is it important? Easy, that’s way we have listed the following 10 reasons

Reason 1: you die to know which scenario for the future of the EU has been chosen by the President of the Commission. Remember that in March of this year, the EU commission proposed 5 scenarios for the nearby future of the Union, here you can find our own style summary:

Reason 2: Terrorism and Defense. You want to know the role played by the security and fight against terrorism in the European agenda. In 2016 we had fresh memories from the attacks in Bataclan-Paris and Marseilles, now, after the attacks in Barcelona and London, European citizens feel , more than ever, the need of a shared response to the terrorist thread.  Bear in mind too the latest cyber attacks and other issues that can cause sleeplessness

Reason 3: USA and the world. In 2016, our nice friend Obama lived in the White house, everybody was happy with him, but this year we got Trump, the finest example of  tact and diplomacy,  strong believer in climate change, free trade champion….wait, just the opposite!! this is the blond burden to deal with. Thank God (or Robert Schumann)  we have the High Representative with us working extra time, besides she is vice-president of the Commission. Will her performance and the European foreign policy deserve a big chunk of the speech?

Reason 4: Poland. During last year, Polish government has shown they like to live dangerously. Their constitutional and legislative changes approached Poland to trigger the famous article 7 i.e the first “red card” ever shown to a member state, losing temporarily its right to vote (it hurts) and/or without European funds  (it hurts more). Believe it or not, our “friend” Victor Orban (Hungarian Prime minister) has much less tickets to win the article 7 lottery

Reason 5: Inmigración and refugees. An always controversial topic. The Commission already tried a common solution to the challenge. Will they try a new one?  Will member states answer and react positively to it?

Reason 6: Brexit. We are dying to know what’s next on the Brexit epic saga, if we are lucky, we’ll listen some sly references to  Pancho’s Villa Army*, also know as Theresa’s May cabinet,

*The exemplary organisation and careful actions for Brexit negotiations make them worthy of that name.

Reason 7:  what is the status of the Commission’s plans and strategies?  When the current Commission was elected, mid 2014, his President proposed 10 action priorities and an investment plan , known as Juncker’s plan. Therefore, even if it is only because the speaker is the  father of these creature, we can expect some references to their state of development (look my boy/girl how tall is he/she).

Reason 8: check what they did with your vote.  Believe it or not, Mr. Juncker was elected with our votes in the last European parliament elections (some vote for his list, others didn’t, but he was chosen because his list got the majority of the votes cast) MEP as the ones who are going to take part in the debate were chosen by us too. IF you didn’t go to vote, do not blame others for the selection of speakers

Reason 9:  to boost your European morale. After 2016 SOTEU we were on the verge of crying without stop: Brexit, Austrian elections to be repeated, rise of  Marie Le Pen and her  National front in France and Geer Wilders in Netherlands,  Trump looming  in the horizon- Now, everything glitters with yellow stars and European blue: Macron got elected as President of the Republic with the Ode to Joy as soundtrack; In the Netherlands, Geer Wilders arrived as second force without a chance of forming an alliance with other party; in Austria,  the Green-Candidate was elected mostly because of his pro-European credentials; in Germany, the game is between two candidates with strong European credentials Ms. Merkel (we already know her) and Mr. Schultz (we know him from his position as President of the European Parliament) 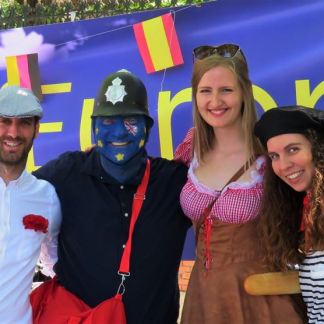 Reason 10: You like the image of a plenary room crowded . You can not expect less from the central event of the European year,  it’s a hell of event for good I mean.

Reason 11: You get bored at home. So the SOTEU is a good chance to interact in social media, enjoy live broadcast (with doubling) and other 2.0 considerations.

Reason 12: Because we all love to see again something like this.

Follow Ya semos europeos on WordPress.com
Únete a 3.346 seguidores más